I often get questions from keepers regarding what to do when their teammates won’t listen to them. It’s safe to say that sometimes the situation involves a systemically toxic environment, in which case finding a new team might be the only option, but before it goes that far, here are some things keepers can do to help improve rapport with their team. 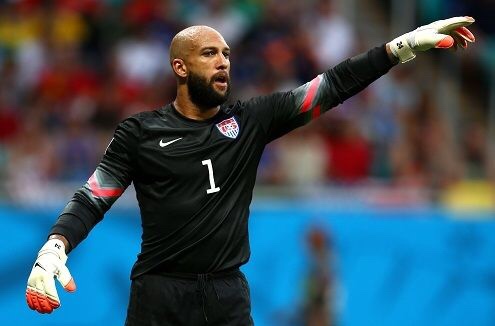 1) Start with a teammate you can trust – Very often, there is a player on the team with whom you have a good relationship. Maybe that player plays with integrity (hustles back, listens, marks well), if it’s a center back or a holding midfielder, that’s a big bonus. Get them on board and use the power of both of you to get a third player to start listening and snow ball from there into a fourth player, a fifth, etc. until you have the majority of the team working with you and holding each other accountable. This is called positive interdependence.

2) Carry yourself on the pitch with the utmost confidence – You have to believe in yourself if you want others to invest in you. The first thing I do when I play with a new group for the first time is I introduce myself to the back line: “Hey I’m Mike,” I shake their hands or give them a pound one at a time and ask their names, then I quickly take charge and tell them one of my strong traits— “hey, if you guys need to use my feet, it’s not a problem, you can play back to me all day!” Once you start believing in yourself, there’s no limit to what you can do.

3) Talk…LOUDLY! – Your teammates need your direction, but here’s the trick: you can’t just be a talking head the entire game, or scream your head off at the wrong times, they will start to drown you out. Be concise, to the point, and specific with what you say. Do not mince words. Call “keeper!” early. Your volume and tone should match the situation. An unmarked player in the six at the near post? That’s an emergency! You need to tell the nearest player to mark him, and do it with urgency! However, if it’s your team’s corner kick, and they have a target forward creeping up past midfield stretching the field, you can be conversational with your backs about how to defend him. “Johnny, watch your right shoulder”.

4) Back up your talking with your play – If you can back all this up with great goalkeeping, then you will get buy-in from your teammates. Once they know they can rely on you, they will start hanging on everything you say. This is especially true if you are new  to the team or in a new environment. They need to know that they can rely on you.

5) Be critical when you have to, but balance out your criticism with a positive – We’ve all seen Tim Howard or other goalkeepers lose it on their teammates (oh, those crazy keepers), but what you don’t always see is that good leaders might yell at someone for not marking or turning over the ball in a bad spot, but when the ball goes out for a goal kick the keeper might say “I’m only being hard on you because I know you are a baller, let’s go, we got this!”

Good luck out there, I hope this helps some of you guys.

We’ve all heard the expression: “look like a pro, play like a pro”.  Goalkeepers should be no different. No longer do keepers need to wear wild subliminal print jerseys or big bulky pants or god forbid… knee pads. Here are some essential tips to getting the right gear, so that you can train injury free and get the most out of your training.

Gloves: If you show up to train without gloves, you might as well not even have shown up. Keepers at ANY AGE should have a minimum two pairs of gloves. One pair for practice. These do not need to be expensive. They just need to fit right and be kept clean (yes you MUST wash your gloves, there is no reason to have smelly hands). The second pair should be reserved for games. These should be a better pair with superior grip. These should be kept in a glove bag and unveiled only for games or tryouts. There should be an almost religious ritual of putting on your game gloves; you should feel like a soldier, armed with a sword you received by a king to go into battle with.

Shirt: If you are comfortable wearing  a goalkeeper jersey to practice, that is fine, but elite goalkeepers usually wear a dry fit training T-Shirt with an under armor type base layer. Hear me out—most technical fabrics in base layers an performance t-shirts help you regulate your heat. They usually remove moisture from your body and put it on the outside of the shirt where it can evaporate. Cold weather base layer’s also help keep heat close to your body and are essential for cold days. The added benefit of having long sleaves without a ton of loose fabric getting in your way, is that you can dive, without worrying about scrapes or turn burn, while still getting a true feel of the ball when you catch it. This is an essential demand for high level keepers.

Padded Compression Shorts: This is another essential item. You never want to stop training due to scrapes or turf burns. Worse yet, you never want to develop bad habits because you don’t like hitting the ground a certain way. Nip this in the bud by investing in padded compression shorts to wear under your shorts or pants. If you don’t want to look like a basketball player from the 80’s with your compression shorts longer than your soccer shorts, cuff them underneath so they don’t run longer than your shorts. Wear them to every session.

Shorts / 3 Quarter Pants / or Long Pants: OK there is room for choice here, most pro goalkeepers train in three quarter pants. They form fit the legs, there is not a lot of extra material, and they protect your legs from turf burn and other scrapes. Long pants are ideal for cold days or poor services. Shorts are fine, so long as you have padded compression shorts underneath.  If you are training on turf and you want to wear shorts I would recommend long base layer tights under your shorts and compression pants. This way sliding on turf won’t be a problem.

Remember, you need to be able to perform all the functions of a goalkeeper without getting injured, so make sure you protect your body while staying comfortable and feeling like a pro! 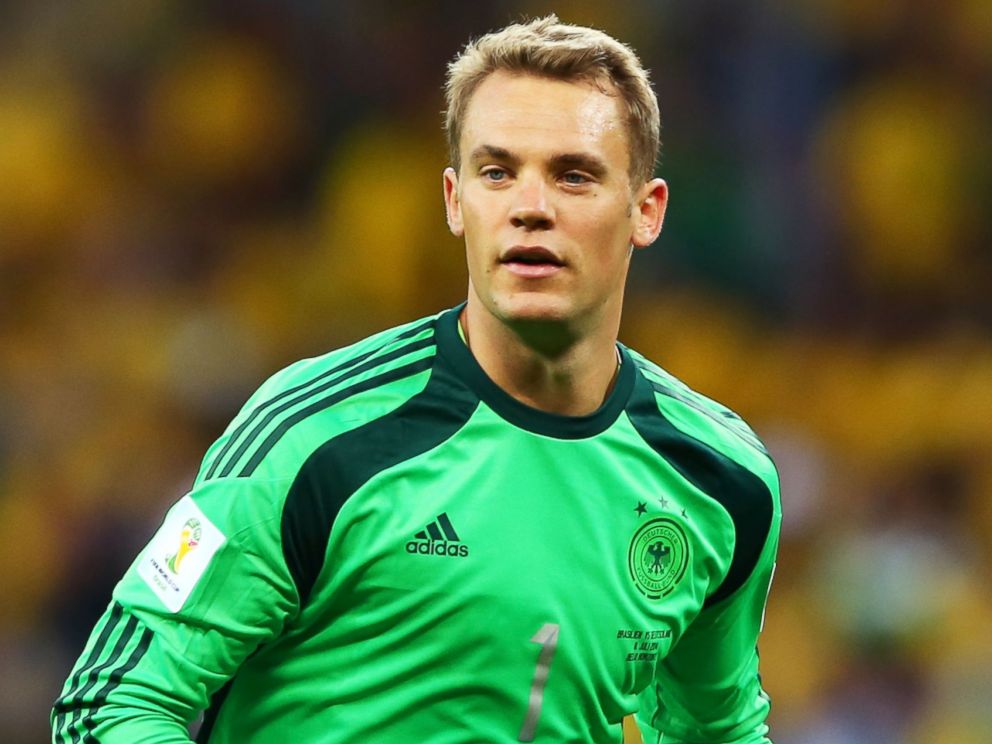 The goalkeeper’s position in the goal is determined by many factors, but these general principles can help the youth goalkeeper establish a starting position that works form him/her.

Every goalkeeper is different. Some goalkeepers boast strengths such as speed, while others are slower but have quick fast twitch muscles and great reaction time, some goalkeepers are tall, and others are shorter. Coaches, players and even parents often have different ideas on where the goalkeeper’s starting position in the goal should be and it can lead to unneeded stress on a young goalkeeper who is already under a great deal of pressure.

Understanding these principles of positioning can help the goalkeeper adapt their own starting position to suit the needs of his/her ability, the team, the situation or the environment. These principles are not intended to be steadfast rules, rather touchstones to base one’s own personal philosophy from.

German keeper Manuel Neuer is known as a “sweeper keeper” because of his ability to adopt an aggressive starting position and quickly close the distance behind the last defender in the case of a ball played in behind the defense. His size and tremendous athletic ability allow him to keep such an aggressive starting position.  This gives him, his team, and his coaches the confidence to know that he can recover back to the goal in the case of a shot. Moreover, his ability to read the game and see things develop in advance also supports his aggressive approach to goalkeeping. Not all youth goalkeepers though are Manuel Neuer.

Understanding these principles of positioning will help any youth goalkeeper tailor their own starting position to best suit the demands of the game. 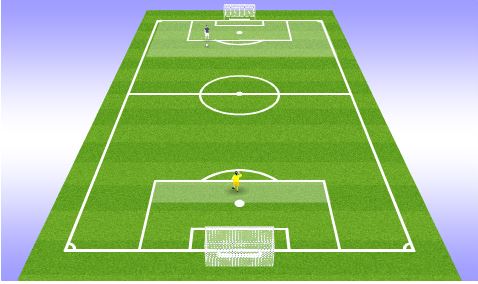 When The ball is in the offensive third of the field the goalkeeper should stand between the penalty spot and the top of the 18 yard box (or slightly past it).

Read the run of play. If your team has the ball and is threatening the other team’s goal you can be more aggressive off your line. As the other team gains possession and starts to threaten you can start move back toward the penalty spot.

It is Important to never be too far away from your back line. The goalkeeper should be able to close the space in behind the last defender as quickly as possible if called upon, while also being able to get back to the goal in the event of a shot.

When the ball is in the middle third, the goalkeeper should be trying to stay in line with the ball and the center of the goal, while moving between the 6 yard box and the penalty spot.

There is likely to be a lot of change of possession in the middle third but the principles of positioning remain: 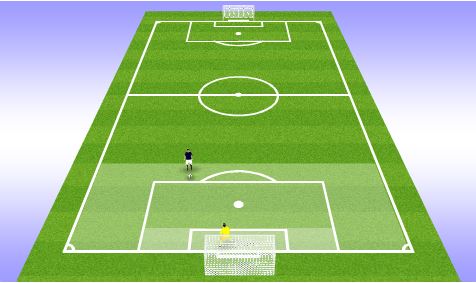 When the ball is in the defensive third, the goalkeeper should be standing somewhere between the goal line and the 6 yard box.

Many factors can dictate exactly where the goalkeeper positions himself, such as:

The fall season is over. Hopefully your team has moved indoors. As the goalkeeper however, getting the ball smashed at you from point blank range and diving around on hardwood gym floors or a thin layer of turf sitting atop a cement foundation doesn’t quite cultivate the well rounded goalkeeper coaches are looking for in the spring.  Here are five things you can be doing this winter to lift your game.